Artist Lillian Gray is delightfully outspoken when it comes to the value and nature of art. I’m telling her how dense I feel when I look at paintings by artists like Mark Rothko and think: “I just don’t get it”.

Gray laughs in sympathy. Her own pet hates are“artists” who throw spaghetti on the floor or pee into a bag and put it on a pedestal. I’m incredulous, but yes, she says, both of those have actually been labelled as art.

“Some of these modern conceptual stuff has lost its audience. People end up feeling like the village idiot because they don’t get it,” she says.

While every artist needs to figure out their own style, core professional training is crucial, she believes. “There is craftsmanship, which is how the pencils and different colours and paints work, and how do you draw anatomy and muscles. Some people stick with the craftsmanship and I call them ‘human printers’. They can literally draw something so it looks real, but there’s not much there. The other side is all about the conceptual meaning and the message, and often there’s no craftsmanship. I think we need to put the two together so you have a message and skill.”

Gray’s opinions are as refreshingly vivid as her bold portraits, painted in thick, rich oils. A face can be a patchwork of green and aquamarine, burnt orange, purple and yellow, making striking portraits that defy being labelled as black or white.

“People don’t know if they are black or white because they are blue or green, so they belong to the world. They are global, and that to me is a strong message,” she says. “To ask what colour they are is missing the whole point.”

Her portraits also carry the message that we are all a little bit broken and rough around the edges, but still beautiful. “We are all unfinished works of art,” she emphasises.

The World Is Her Gallery

Gray is gaining a global following, with three international exhibitions to her credit this year. The first was the Parallax Art Fair in London, where she was the only South African invited to exhibit. That required a portfolio of 23 small works in bright colours for colour-starved Londoners living in shoebox-sized houses. It’s far harder to paint small pictures, she says, because her movements are confined and she can’t put her whole body into it.

Her second international exhibition was in New York, with 10 larger-than-usual portraits. In September she’ll create a fresh collection for Italy’s prestigious Florence Biennial.

She’s currently intrigued by the vivacious neon colours of street art. (“Don’t call it graffiti – the artists get very angry,” she laughs.) She’s asked oil paint manufacturers to produce neon colours but they haven’t yet, so she’s experimenting herself. The best results so far come from applying alternate layers of oil and spray paint to the canvas, to get the colour plus the texture.

Gray grew up in a poor rural area of the Cape West Coast with absolutely nothing, and the lack of electricity and television forced her to create her own entertainment. “The first time I entered a competition at the age of 10 a judge actually bought my painting, which showed me it could be a viable business,” she says.

It must need lots of talent too, I suggest, and we go straight back to her opinions. “I think the starving artist is a myth. People fall in love with the story of Van Gogh as a struggling, misunderstood, outcast artist and forget all the other greats that were very wealthy, like Andy Warhol, who owned seven Rolls- Royces, and David Hockney, the multimillionaire,” she says. “I think if you want to make it, you can make it. I don’t really believe in talent – I’m very much a follower of the 10,000 hours rule.”

The Business of Art

Since she studied Business Management as well as Fine Arts at Stellenbosch University, she’s certainly got the commercial side of her craft sorted. Her business acumen also makes her critical of art galleries that double the price of any piece they sell, and pay the artist only half of that. Her criticism won’t endear her to the galleries, but that’s fine, because she prefers to sell her work at more affordable prices via her website.

She’s also proving that hard work rather than natural talent can create good art by running an art school at her home- and-studio in Fairlands, Johannesburg. There are five teachers and 150 students who come for weekly classes, from kids to teenagers to adults.

“I have students who have never lifted a brush and six months later they are doing amazing things because they have applied their minds,” she says.

We all have art in us as children, but we close it off as we grow up and become less freely expressive, she believes. Not every kid gets to be expressive these days, since TV dulls their creativity and prevents them from dreaming up their own ideas.

It’s important that children are encouraged to be creative, she believes, especially if they face a future where their workmates are going to be robots. “You need to decide what’s going to make you stand out, and I totally believe it’s going to be our creativity. Our ability to think out of the box. I don’t care if you end up being an engineer – an engineer with creativity is a much better engineer. I don’t care if you end up doing robotics or maths. Your mind has been changed and you are open to more possibilities.”

Finding her own voice and honing the messages she wanted to send was a journey of trial and error. Gray found her direction after a friend pointed out that some of her paintings were extremely realistic, but didn’t really contain her personality. “It was so true because I’m extremely energetic. I love having people around and having fun and I’m very hospitable, and I realised my art needs to capture that,” she says. “Your talent and values and character all need to come together to really find your voice as an artist. The loud, contrasting colours are very much me from my heart.” 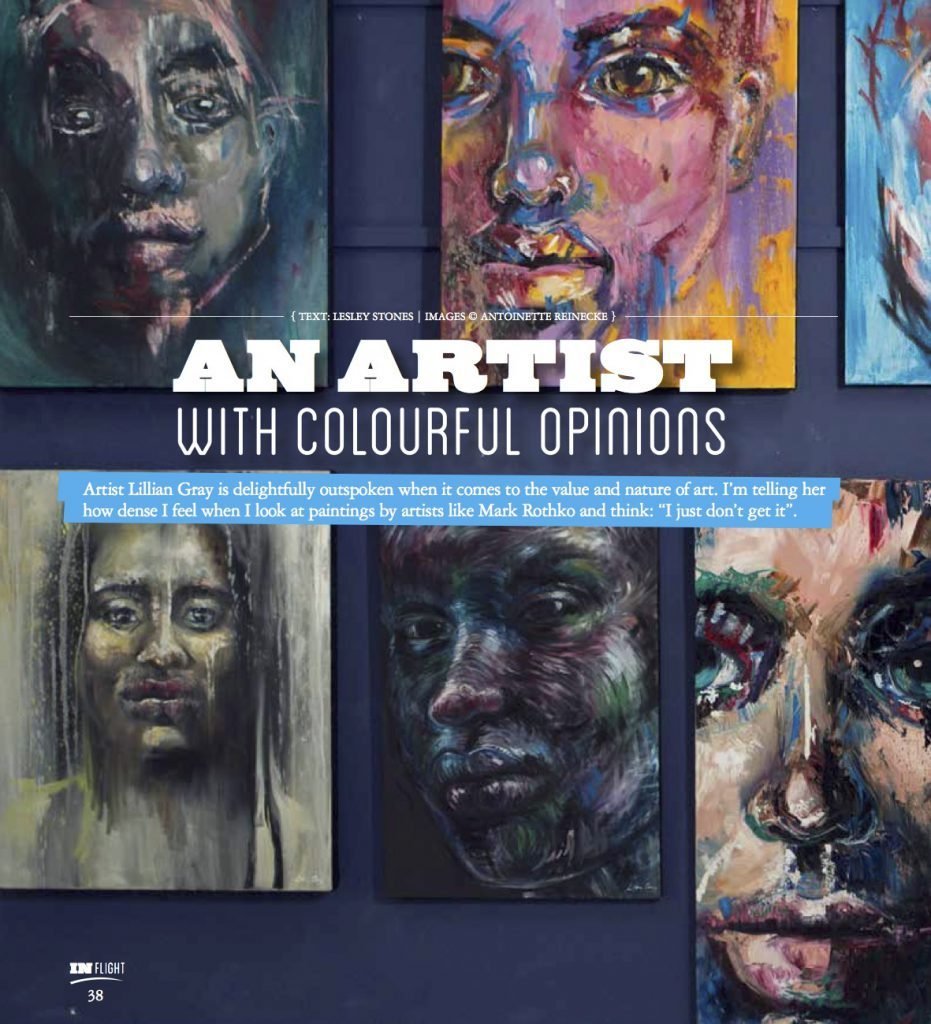 Sorry, no pages was found 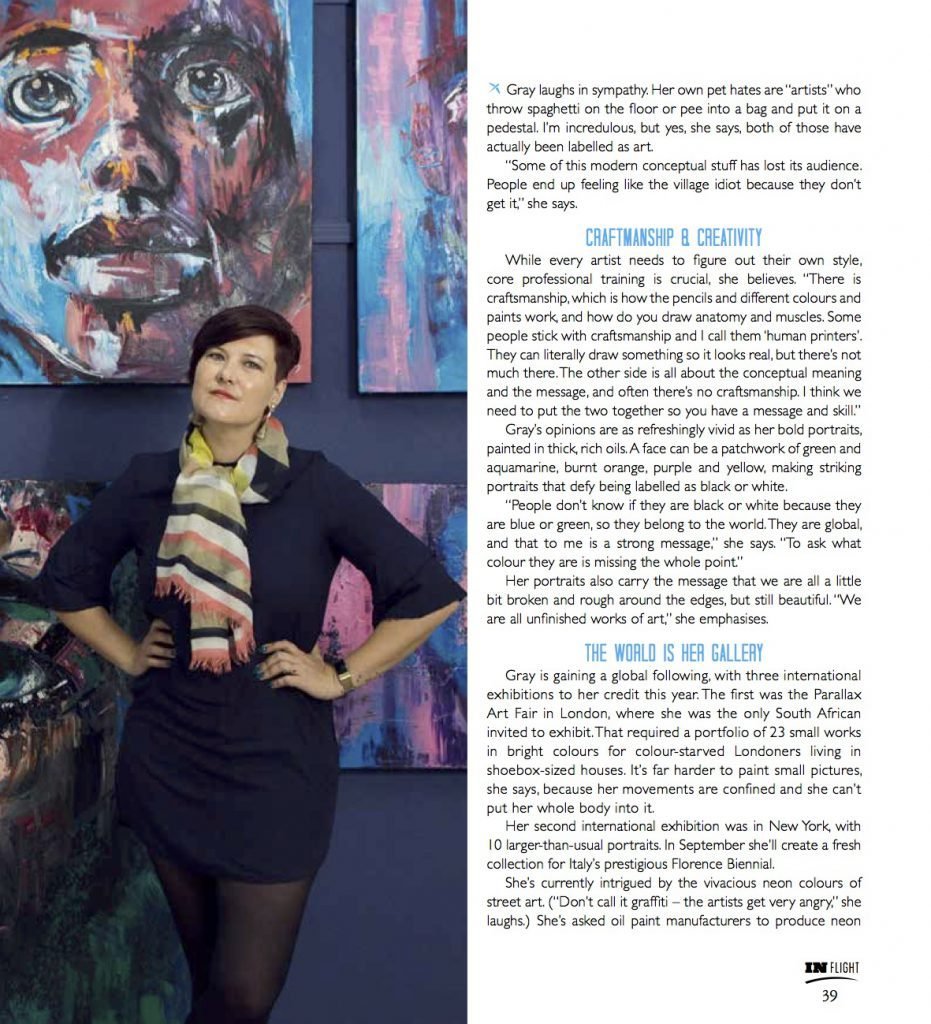 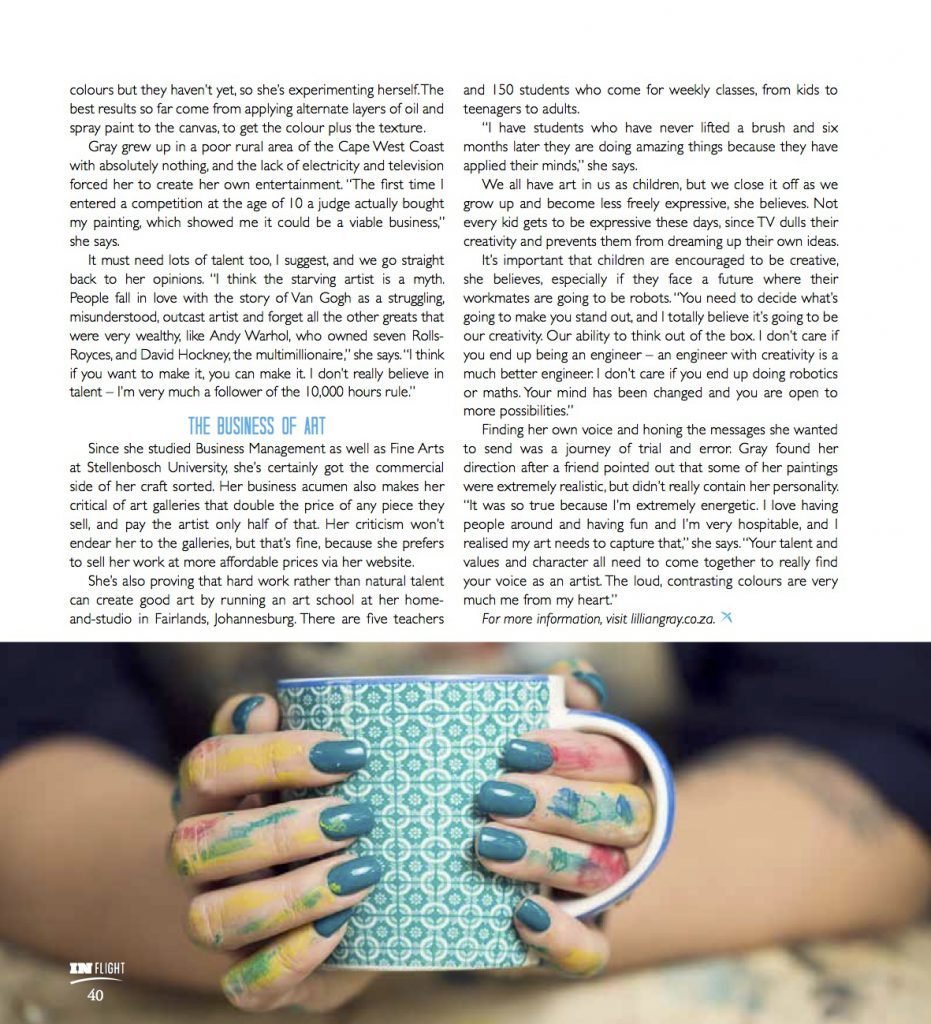